New to Karate Dottie? Click here to start at the beginning.

“There it is.” said Dottie.

Gordo’s attention snapped back to the present. Dottie had moved slightly ahead of him and was picking up speed. He fumbled with the shoebox and the shovel, desperately not wanting to drop Fluffy again.

As they walked into the clearing, Gordo noticed a light coming from the branches of a large tree. He looked up and saw the light came from a window in what appeared to be a tree house. As his eyes became more adjusted to the light, he was amazed by the apparent size of the house hidden in the leaves of the old majestic tree.

The tree house looked haunted. It sat on a weathered mismatched wood platform high off the ground. Gordo could see at least four windows. All were shuttered with the exception of the one with the light shining brightly in the window. The light was such a contrast to the darkness that every time he looked at it, it temporarily blinded him and he had to wait a moment for his eyes to adjust back to the darkness. 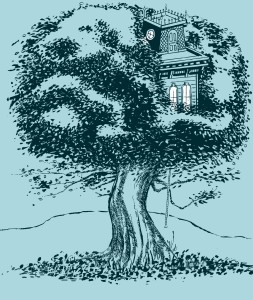 “Come on, Gordo.” Dottie urged. Gordo looked over at her and froze with terror. It felt as if ice water surged through his veins.

Dottie had already begun climbing up a thin rope ladder that attached to the bottom of the platform supporting the tree house. Next to where the ladder was secured was a closed wooden door.

“Dottie, what are you doing?” Gordo whispered loudly.

“What does it look like I am doing? We have to go up to the tree house to see Mortimer. Hurry up!” she said.

“Can’t we use the stairs?” Gordo was not so sure the rope ladder would hold his weight and he did not want to find out at such a terrifying height.

“Don’t be silly. Come on, you know you can do this. Better put the shovel down.” Dottie said with a smile and scampered up the rope.

Gordo lay the shovel down on the ground next to the base of the gnarled massive tree trunk.   Deciding he needed both of his hands, he put the shoebox holding the earthly remains of Fluffy into his raincoat and zipped it up. It was a tight fit and the edge of the box kept bumping against his multiple chins.

A wash of light startled him and he looked up to see the source. Dottie had made it to the top of the ladder and someone had opened a trap door and was helping her into the tree house.

“I can’t believe that I am doing this.” Gordo muttered to himself as he climbed up the rope ladder. “There is no way this is going to end well.”

Gordo’s heart was beating so hard with the exertion of going up the ladder that he wondered if it would revive the still heart in the shoebox pressed so tightly against his chest.

He couldn’t pull himself up the rope by just his arm strength so he used his feet against the trunk of the tree to help give him leverage. The slick bottoms of his rain boots combined with the wet bark of the gnarled tree made this process very difficult.

After what seemed forever, he made it to the top of the ladder. The trap door was a little to the side which required him to reach over with one hand to grab onto the floor to pull himself into the tree house. It took two attempts before he got a good grip and heaved himself and his gruesome cargo onto the floor of the tree house.

Dottie and Mortimer were talking and seemingly oblivious to the fact that Gordo nearly fell to his death. Breathing heavily, Gordo leaned over and took in the room.

He realized the tree house was bigger than it looked like from the outside. The room they were in was a large workroom connected to two hallways. A set of stairs indicated there were at least two stories.

The room was filled with stuffed animals like a macabre petting zoo. The walls were covered with birds and a few different mounted heads. Most of the stuffed animals looked like roadkill. Some looked worse than others, with the stitching clearly visible. Squirrels, beavers, snakes, lizards, and a skunk all looked blankly at him.

Over on one side of the room was a row of bookcases filled with dusty old books on various arcane subjects. On top of the bookcases were jars filled with various cloudy liquids with dark shapes floating in them. Gordo thought he saw one of them move.

In the center of the room was a large wooden worktable covered with dark stains. It was covered with different sinister looking tools, most of which Gordo had never seen before. Gordo wondered if the stains were blood.

In addition to the tools, there were several intricately designed mechanical parts scattered across the table. Highly polished and with their moving parts glistening with

a light coating of oil, they seemed strangely out of place with the stained materials on the worktable. It looked as if Mort was involved with some sort of nightmarish science project. 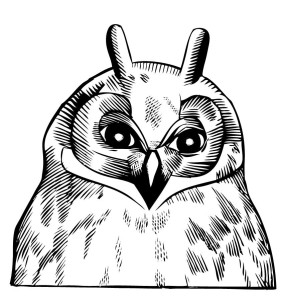 On a stand next to the worktable was a striking large owl. It looked amazingly lifelike. Apparently, Mortimer had gotten better with practice. Gordo leaned in to take a closer look at the detail on the back of the owl.

Suddenly, the owl’s head swiveled around and Gordo found himself looking straight into large stern eyes that were as black as a thousand midnights down on a Cyprus swamp.

“He’s real.” Mortimer said and walked up to pet his owl. He reached into his pocket and pulled out a treat that looked like raw meat. The owl gulped it down and flew over to perch on top of a bookcase.

“I thought he was stuffed like all the rest of them.” Said Gordo.

“He will be one of these days.” Said Mortimer in a tone that was very matter of fact.

Gordo eyed Mortimer uneasily. Mortimer was a thin boy who loved to dress all in black. His hair was also black as midnight and was cut perfectly in a bowl shape. His mother was very frugal and cut his hair at home using the tried and true method of placing a large bowl on his head like a cap and cutting anything that stuck out. His coke bottle glasses made his eyes look as large as his pet owl. Gordo made a habit of not trusting anyone who kept raw meat in his pocket.

“Thank you again for meeting us up here so late, Mortimer.” Said Dottie. “We are on a really tight schedule and we need your help.”

Next week: An Impossible Task