New to Karate Dottie? Start at the beginning by clicking here

Gordo worried he might fall asleep and miss meeting Dottie. It seemed as if his parents would never go to bed. His little brother fell asleep around eight. He lay in his bed and listened to the low drone of the television in the living room. He rolled over and looked at the luminous hands on his alarm clock. It was ten thirty. He had to meet Dottie at eleven.

Finally, he heard his mom wake up his dad who fell asleep on the couch and tell him to come to bed. The light under his door disappeared and the house fell silent.

Gordo sat up in bed and pulled back the covers. He was fully dressed. He carefully arranged the pillows to look like he was still in bed fast asleep and covered them with his blanket. Grabbing a flashlight, he started towards the door and then stopped. If he went out the front door, he would have to walk past his parent’s bedroom door. Not to mention he would have to get past the dog and the creaky screen door.

He looked over at his window. The bottom of his window was about nine feet off of the ground. If he was careful he could climb out and slowly lower himself as far as his arms would hold him. Afterwards, it would be a short drop to the ground. It seemed simple enough.

Gordo slipped on his yellow raincoat and walked over to the window. He quietly opened it. He looked down and noticed there was a bucket under the window that was turned upside down. This was fortunate. After several attempts, he finally got his legs out the window. As he held on tightly to the window ledge, he found the bucket with his feet.

As soon as he put his full weight on the bucket it buckled, sending Gordo backward with a yelp. He hit the wet ground squarely on his back. He lay there silently with his heart pounding waiting for the lights to come on. A dog began barking in the distance. Gordo was frightened but he wasn’t sure what scared him more, getting caught sneaking out at night by his parents or missing his appointment with Dottie.

After a few minutes, it became apparent he would have to do neither one. He got up and brushed off the leaves. Picking up his flashlight, he looked over at the crumpled bucket and up at the window. Gordo wondered how he would get b
ack in. He shrugged to himself as he walked towards the shed.

The shed was located at the back of the yard behind the house. In daylight, the shed was a scary place. At night it was downright horrifying. Gordo was afraid to turn on the bare lightbulb in the shed so he used his flashlight to cut through the darkness. Gordo was terrified of spiders and the shed seemed to harbor every bloodthirsty spider in town. He imagined them staring at him from the nooks and crannies in the shed where they built their silken webs of death. He shivered and grabbed the shovel leaning up in the corner. As he walked to the door, his hand brushed through a web and his heart nearly burst through his chest. 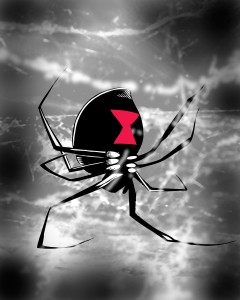 He ran out of the shed and did a little dance in the yard trying to get any remnants of the gossamer web off his hand. He then headed down the path towards the cemetery.

Next week: A Dreadful Plan