New to Karate Dottie? Start at the beginning by clicking here

The service was thankfully brief. Clint, the preacher’s son, did a nice job talking about how Fluffy touched lives and how one day Suzy and Fluffy would be reunited in a world where there would be no suffering.

The rain began as a drizzle but quickly became a steady downpour. It just added to the dreariness of the day. Dottie felt her clothes slowly get heavier as the rainwater saturated the fabric. She leaned in closer to Gordo for comfort and to block some of the rain. The other children quickly left the funeral as soon as the shoebox was lowered into the cold soggy grave.

Dottie thought she saw sparks come out of the side of the shoebox as it went into the grave. She thought it must be her imagination.

She and Gordo walked up to Suzy who was the last one standing by the grave.

Suzy by now was completely soaked. Her uniform, normally neatly pressed and crisp now hung limply on her slight frame. Her black patent shoes and white stockings were becoming dirty with the big splashes of mud caused by the rain. Despite the rain, her hair still stood up in every direction as if it was in defiance to the laws of gravity and physics. Her hair was always a platinum blonde but today it seemed even brighter, almost glowing white.

“Maybe you should get another cat…I know the animal shelters have lots of cats and dogs that need good homes.” Gordo volunteered.

This got a reaction out of Suzy. Her eyes flashed with anger and she clenched her fists at her sides. Gordo felt the hair on his arms andthe back of his neck begin to rise.

“I DON’T WANT ANOTHER CAT!!!! I WANT FLUFFY!!!” Suzy screamed at Gordo with all of her might.

She then took off running down the path sobbing uncontrollably.

Gordo was speechless. Dottie felt bad for him. He always had a way of saying the wrong thing at the wrong time. She put her hand on his arm to comfort him.

“I was only trying to help.” Gordo said fighting back the tears. “I know it won’t bring Fluffy back but there are a lot of cats out there that need a home.”

“Gordo, Suzy was very close with Fluffy. She played with her every day and Fluffy even slept in bed with her at night. They were inseparable”. Dottie said. “No one or nothing can fill the hole in her heart that Fluffy left.”

“It is too bad we can’t bring Fluffy back” Gordon sniffed.

Dottie paused and looked at the grave. She then smiled and turned to Gordon, tugging on his jacket.

Gordo’s heart sank. Whenever Dottie had an idea, it got him in trouble. Usually it got him into a lot of trouble.

They began to walk down the muddy path towards home. 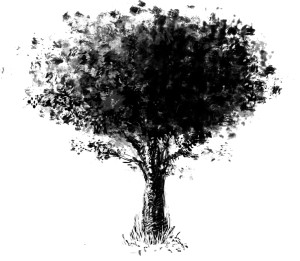 Next week: Silken Web of Death